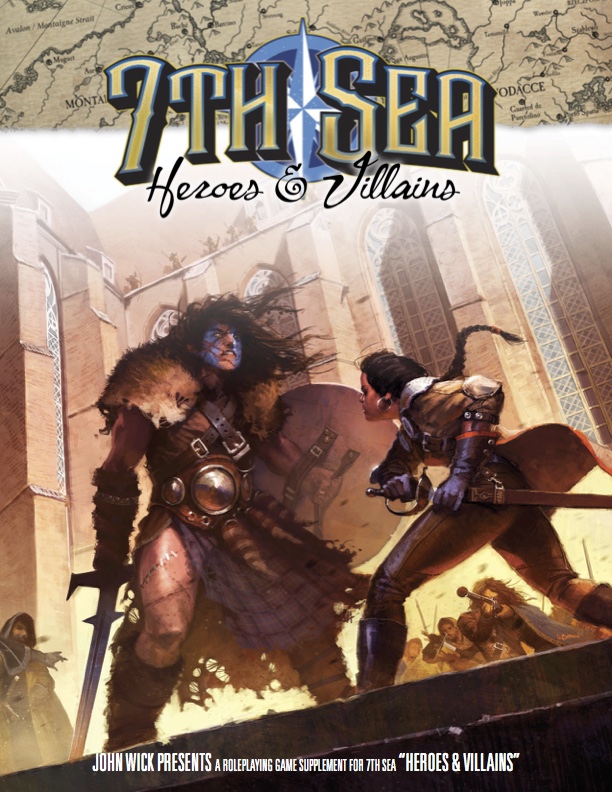 heroes and villains is the newest book in the new 7th sea product line. I just received mine yesterday as of this writing . the book is a nice resource for the new 7th sea game as it adds loads of pre generated characters that can be either used as PC’s or NPC’s . this will help with GM who need a  quick villain or for when a new player joins a group and needs a character but does not have the time to make one.

Having gotten this book and PDF I regret not having the money to get the other books during the kickstarter as these books and the whole game line continue to impress me.

the write ups of the villains and heroes are very detailed and not just a random stat block. each one gives a complete playable history of the NPC, including motivations and RP hints. there is also a variety of characters ranging in nationality, sex, and creed. each character also comes with a piece of art showing the character in their entirety, as opposed to just Busts, or head shots. the characters are broken down into sections based on how the character was built such as the agile character or the political schemer etc. note those are not the actual names of the categories, but i lack a copy of the book and am going by memory here.

the art work is not as good as the main book, but still good. the art work looks a bit rougher and more in the style of old oil paintings. I personally like this as it adds some character to the art, but some people may not like it as it is not as crisp and defined as more modern RPG art is. the art work also shows off the diversity of the characters ranging from all shades from white to black and even body types as a few of the portraits show rather plump characters as opposed to the almost universal skinny adventurers in other games. the only thing I really have an issue with is that in the core book it describes the people from castillian wearing wide brimmed hats called sombreros* yet none of the castillian characters are wearing them.

overall this is a great book. it is of great quality and has a lot of pre made characters that can fit in any game. if you plan on buying some supplements to the 7th sea game pick this one up. also if you are reading this and work for john wick we need more sombreros* in the art work.

*in case you cannot tell i really like sombreros, I do not get to wear them ever, but i like them as a hat.

One thought on “7th sea 2e Heroes and Villains”

I am an avid table top gamer as well as an amateur let's player. I have a BA in psychology as well As an AA in substance abuse counseling (i am not certified though). I currently a graduate student pursuing a MS in environmental management. I have been playing TRPG's for over 20 years. I am an amateur Table top rpg designer also, though i have yet to make it into the publishing of my work.
%d bloggers like this: